What is an e-cigarette? Definition and examples

An e-cigarette or electronic cigarette is a device that emits vaporized solutions, i.e., in aerosol form, which are inhaled. The device, which is battery operated, is most commonly used by former regular tobacco smokers as an alternative nicotine delivery system. Many ex-tobacco smokers also use them because they are less damaging for the health (than tobacco cigarettes). E-cigs simulate the experience of smoking a traditional cigarette, but without the smoke. 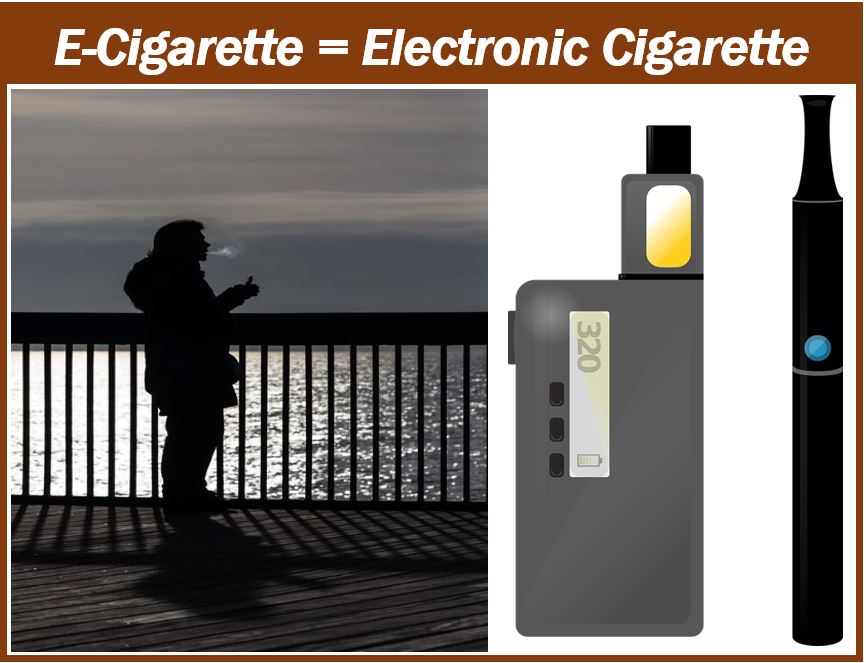 We call the solution that users inhale e-juice or e-liquid. Some e-juices have nicotine in them while others don’t.

People may also refer to e-cigarettes as:

The British National Health Service says the following about ecigs:

“An e-cigarette is a device that allows you to inhale nicotine in a vapor rather than smoke. E-cigarettes don’t contain tobacco and don’t produce tar or carbon monoxide, two of the most damaging constituents in cigarette smoke.”

We refer to the action of inhaling vapor from an e-cig as vaping. The verb is to vape. Just like we say: “Do you smoke,” for tobacco cigarettes, we can say: “Do you vape?” for e-cigarettes.

We use the term because e-cigs produce a vapor or aerosol rather than smoke.

Many tobacco smokers find that vaping is an effective way to stop smoking. It is healthier to abstain from any type of smoking or vaping. However, e-cigs are significantly less harmful than smoking as far as human health is concerned.

Some studies have shown that vaping is an effective way to give up smoking. A major trial in the United Kingdom found that e-cigarettes are twice as effective as nicotine patches, gum, and other nicotine replacement products.

Cancer Research UK says the following regarding the dangers of tobacco smoking vs. vaping:

“Evidence so far indicates that e-cigarettes are far less harmful than smoking as they don’t contain tobacco or involve combustion. There is no smoke, tar or carbon monoxide, and studies looking at key toxicants have generally found much lower levels than in cigarettes.”

“They do contain nicotine, which is addictive, but isn’t responsible for the major health harms from smoking.”

How does an e-cigarette work?

E-cigs have the following main components:

The user needs to press a button for the device to release the aerosol, or simply puff, which activates the battery.

According to the Centers for Disease Control and Prevention (CDC):

Studies suggest that e-juices containing tetrahydrocannabinol (THC) are causing most of the EVALI cases. Devices from informal or illicit sources may also be culprits.

THC is a susbstance found in marijuana that is responsible for its psychoactive effect, i.e., it is what makes people feel high or stoned.

Regarding the link between lung disease and THC in vaping products, the US Food and Drug Administration (FDA) said the following:

The FDA urges vapers not to use products that contain THC. It also warns against purchasing devices or e-juices off the street or from other social or illegal sources.

Some studies suggest that vaping companies have targeted young adults and teenagers with cartoon marketing. In the United States and many other countries, there are strict regulations regarding the use of cartoons for marketing tobacco products. However, this is not the case for e-cigarette marketing.