What is a job action? Definition and examples

A job action is a protest that workers organize, often in the form of a slowdown. Sometimes, the action involves nobody volunteering to do any overtime work, i.e., an overtime ban. The workers carry out their job action as a means of forcing compliance with their demands or protest policies.

Maybe there have been too many redundancies, i.e., dismissals. The company’s workers want to force the management to stop firing people. So they organize a slowdown, work-to-rule, overtime ban, or perhaps even a strike.

In a job action, workers may do just the minimum amount of work required according to the rules of the workplace, for example.

Dictionary.com has the following definition of the term:

“Any means, as a work slowdown, of organized protest or pressure by employees to win some goal or gain from their employers.”

Some dictionaries, such as Collins Dictionary and BusinessDictionary.com, say that a job action could include going on strike.

The California Department of Fish and Wildlife includes a work stoppage, work slowdown, sick-out, and strike in its definition. 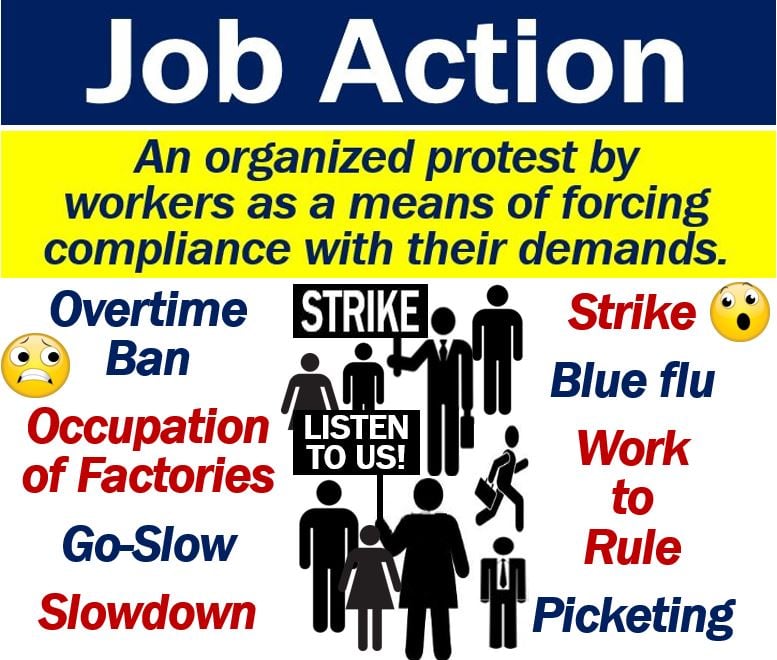 According to BusinessDictionary.com, a job action is: “A temporary action taken by employees in order for their demands to be met or opinions be heard regarding managerial decisions.”

The term ‘job action’ is common in the United States and Canada. In the UK, Ireland, Australia, South Africa, and India, however, people say ‘industrial action.’

The two terms refer collectively to any measure that organized labor takes to force their demands. Trade unions may also organize industrial action. Trade unions are organizations that represent workers and try to get their employers to pay and treat them well.

Workers may organize a slowdown if they are unhappy with a pay rise or working conditions. They may also dislike something in their work contract.

Sometimes, the aim is wider than just the workplace. Perhaps there is a mass movement across the country for political or social change. Workers may express their support by taking industrial action.

Wikipedia says that we often use the term as a euphemism for a strike or mass strike.

What may job action include

According to several sources in North America, the UK, and other English-speaking nations, job action or industrial action may include: