Job-sharing is an arrangement in which two part-time employees share the duties and responsibilities of a full-time role. Typically, they work at different times and receive pay and holidays on a pro rata basis. 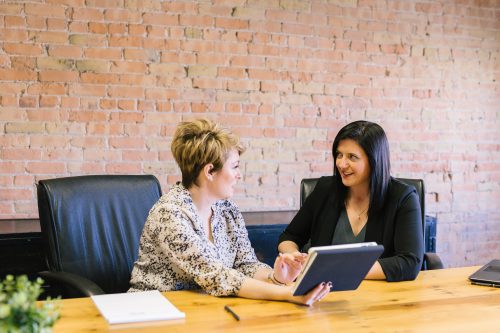 The online Cambridge Dictionary define the term as “the practice of dividing the duties and the pay of one job between two people who work at different times during the day or week.”

The sharing can involve more than two people. For instance, the business channel Invest Northern Ireland state that job-sharing is “when two – or sometimes more – people share the responsibility, pay and benefits of a full-time job.”

Helen and Giulio share a role that involves running a help desk. Answering the phone and dealing with queries during weekday working hours forms the bulk of the work. Helen works Monday, Tuesday, and Wednesday. Giulio works Wednesday, Thursday and Friday.

Wednesday is “crossover day,” when Helen and Giulio are at work together. Some employers and job-share employees prefer this overlapping arrangement.

Because they work the same number of hours, both Helen and Giulio receive the same pay and holidays. The amount that they receive is three-fifths of a full-time equivalent, since they each work 3 out of 5 days a week.

A type of flexible working

Job-sharing is a type of flexible working that gives workers the opportunity to keep their jobs while reducing their hours. Often, this is in order to fulfil family commitments.

In the above example, Helen shares the care of elderly parents with her brother, while Giulio wants to spend more time at home with his young family.

Communication is an important factor in making the system work. The employer needs to establish clearly the responsibilities and duties of the job-sharers. Also, the job-sharers need to have good communication with each other. This is important for handover of tasks and to ensure continuity.

How the job-sharers communicate with each other will depend on the nature of the job and the tools available. Crossover days and video conferencing, for example, may be effective options.

Technology often forms an essential part of a job-share scheme. Video-conferencing and other tools can help the job-holders to stay in touch with each other and the workplace.

Online tools can also aid the recruitment of potential candidates, including those already in the workforce. An example of the latter is the Job Share Finder site of the civil service in the United Kingdom.

The aim of the online resource is to help existing civil servants to find potential job-share partners. Users register to create an account and then give details about themselves. The details include current role, expertise, experience, and preferred working arrangements. The site’s database then searches other registered users to find potential matches.

Job-share schemes may offer numerous benefits to organizations. They can, for instance, be a way for employers to retain employees who find themselves unable to work full-time.

One case study examined a 3-year job-share between two female leaders in a higher education setting in the U.K. The authors concluded that the arrangement helped both the job-sharers and their employer. They also suggested that it helped to develop leadership in the organization.

The study highlighted how the job sharers were able to overcome some of the barriers that female leaders can face. It described, for instance, how the scheme helped to secure work-life balance and increase confidence.

Another benefit that may not be immediately obvious, is that the employer may be able to meet peaks in demand more readily if they have job-sharers among their workforce.

The scheme potentially secures greater continuity during absences, such as when one of the workers is sick or on holiday. In addition, it offers the employer a bigger pool from which to recruit.