What is upper class? Definition and examples

The upper class refers to the richest people in society. We distinguish it from the middle class and working class. The upper class represents a tiny proportion of the population. However, it owns and controls a disproportionate amount of the country’s wealth, i.e., up to two-thirds of it.

People in this class enjoy the highest status in society. In the past, the aristocracy belonged to this group.

“[The upper class is] a social group consisting of the people who have the highest social rank and who are usually rich.”

Apart from being the wealthiest people in society, people in this class also wield the greatest political power.

It consists of individuals who inherited their wealth and those who started off in the middle or working class. 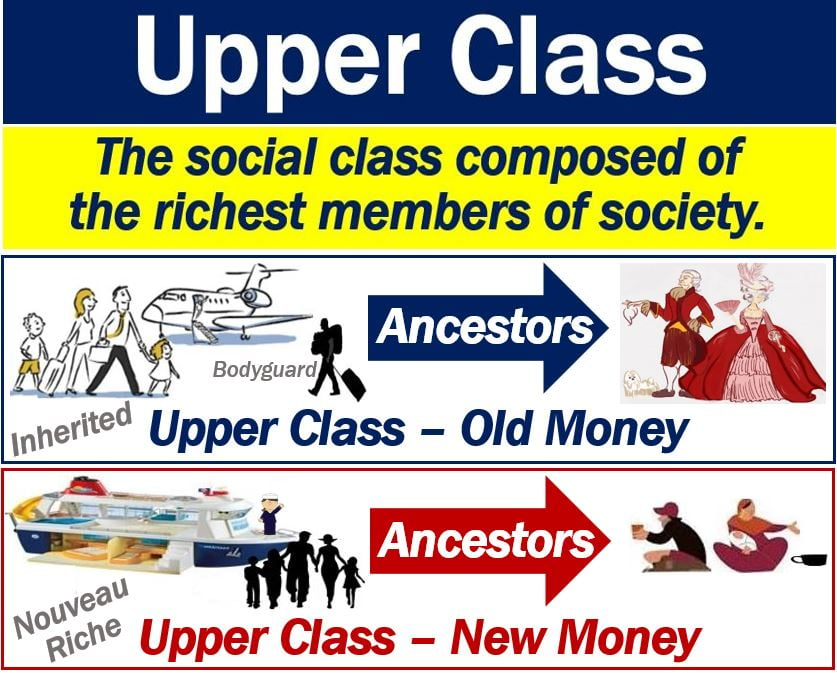 In the United States, this class consists of people at the top of the socioeconomic ladder.

Compared to the UK, wealth is the main determinant of this class in the US.

However, there are still many Americans today who say America’s true upper class are those belonging to ‘old money.’

Old money refers to families that have inherited their wealth. These families have been wealthy for generations. Old money contrasts with new money or nouveau rich.

Since the Great Recession, estimates have varied. However, they all agree that the top 1% share of America’s wealth pie has grown since 2007.

Upper class in the UK

In some societies, no amount of new money can make you upper class. If you were not born in that class, you will never belong to it. In those societies, which schools you went to also matter.

Many people in the United Kingdom (UK) think this way. In fact, several rich British modern musicians say they are still working or middle class.

In these societies, if you were not raised in a certain way you are not upper class. Also, you must have the posh accent.

In the past, in the UK, the traditional upper class consisted of the landed gentry and the aristocracy. These were privileged families who had inherited their wealth and typically had hereditary titles.

Most post-medieval aristocratic families in Britain originated in the merchant class. They became nobles between the fourteenth and nineteenth centuries.

Since World War II, however, the term’s meaning has gradually evolved. The upper class today in the UK also includes wealthy business people.

Inequality is the difference between the upper, middle, and working classes regarding their wealth or incomes. We also call it economic inequality.

Wealth inequality looks at how much people own.

Income inequality, on the other hand, looks at the difference in people’s monthly or annual income.

Inequality has been increasing in the advanced economies since the 1980s. In other words, the richest people’s wealth is growing faster than the wealth of the middle and working classes.

Did you know that many American millionaires do not see themselves as upper class?

A CNBC survey found that most US millionaires described themselves as either middle or upper middle class. However, the people in that study were among the wealthiest ten percent of Americans.