Win-win is a situation, game, negotiation, or strategy in which all the parties benefit one way or another – there are no losers. In a conflict situation, when the participants are trying to work out a resolution, a win-win strategy is one in which everybody is accommodated; all participants come out winning.

There are many different types of outcomes – everybody might win, one might gain while the other loses, or all parties come out losing.

In a win-win situation, both parties come out on top. In a zero-sum or win-lose situation, however, there is just one winner; the other  party (or other parties) loses (lose).

In the 1980s, how individuals approached negotiations began to change considerably. Rather than thinking that the result always had to be a winner and a loser, many people came to see that win-win negotiations were not only an improvement on the traditional win-lose mindset, but also more desirable, i.e. if all parties believe there is a good chance that they will benefit from the negotiation, they are more likely to take part in it and contribute.

As the concept of everybody winning grew in the world of negotiations, so did confusion about exactly what it entailed. Did it mean that each party came out with equal portions of the pie, or that one would have a bigger slice than the other(s)?

Surely, if one participant had more to offer, they should get more of that pie, shouldn’t they?

If people enter a win-win negotiation, does that mean that they still continue fighting for their corner – do they still try to gain as much as possible for themselves.

According to an article in the Harvard Law School, titled – ‘What is a Win-Win Negotiation?’ – Katie Shonk wrote regarding this question:

“The answer to that question is a definite yes. Win-win negotiation doesn’t require you to split resources right down the middle with a sole focus on being ‘fair.'”

“It doesn’t mean automatically making a concession just because the other party made one. And it doesn’t mean that you should try to avoid conflict and tension at all cost.” 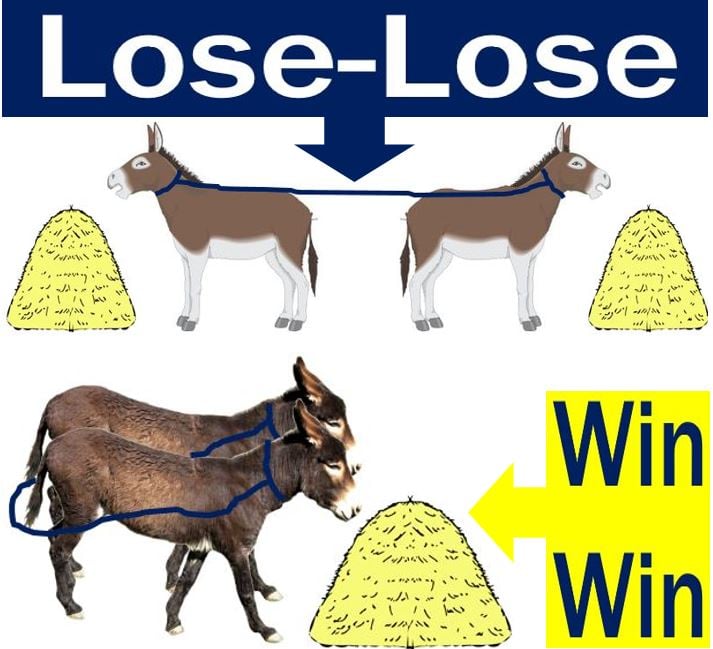 Sometimes, all it takes to transform a seemingly lose-lose situation into a win-win one is a little bit of imagination, consideration and cooperation.

When you are participating in a win-win negotiation, your aim is to work to get the best deal you can for yourself, while at the same time attempting to make sure that the other party is satisfied. It means making offers that are good for you and also for them.

You need to think creatively about how you can help your counterpart and also getting more for yourself.

– Win-Win: In this type of situation, everybody comes out winning.

– Zero-Sum or Win-Lose: is a situation in which only one party wins, while the other loses – this is an adversarial approach.

– Lose-Lose or Negative-Sum: is a situation in which every party loses – nobody wins. All these different terms came from **game theory.

** Game theory is a branch of mathematics which is concerned with the analysis of strategies for dealing with competitive situations where the outcome of one party’s decision depends critically on the actions taken by their counterparts.

Example of a win-win negotiation

A potential client, called John Doe Corp. needs the software for a new project, and has a budget of $23,000. As far as John Doe is concerned, anything pricier than $23,000 is not worth the expense.

Video – Win-win and other situations

This MBN video explains what win-win, win-lose, and lose-lose situations are.