By developing a new organic compound, scientists at Harvard have created a flow battery that could one day help power utilities make more use of wind and solar energy.

Utilities that operate the grids that power cities need safe and cheap energy storage to help them use less fossil fuels and cut emissions. 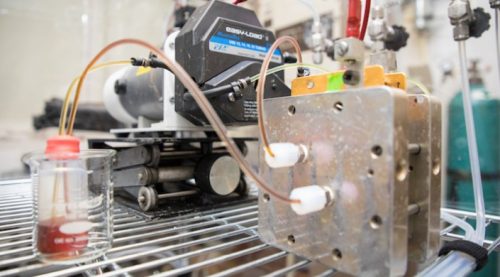 With fossil fuels, they can match rising and falling demand by simply burning more or less fuel. But renewables like wind and solar make energy intermittently.

The technology for capturing wind and solar energy is now quite advanced and the price is falling. The industry is now waiting for storage solutions to catch up.

Lithium ion batteries go some way to solving the problem, but they are only suitable for discharging small to moderate amounts of energy, such as for powering cellphones and homes.

Scientists have already shown that flow batteries are safer and potentially cheaper than lithium ion batteries for discharging electricity over long durations.

Unlike a conventional battery, a flow battery stores energy in charged electrolytes that are dissolved in liquids that are held in external tanks.

It has been described as “both a fuel cell and a battery.”

But many designs use quite costly materials such as vanadium in the electrolyte. A search for an alternative material has led to organic molecules called quinones.

However, while flow batteries based on quinones are cheaper to make, they don’t last as long as those that use vanadium.

Now, researchers from Harvard University and the Harvard School of Engineering and Applied Sciences in Cambridge, MA, have created and tested a new organic molecule that lasts longer and does the work better than any predecessor.

They believe that a flow battery using the molecule – which they call the “Methuselah quinone” to mark its longevity – could charge and discharge energy tens of thousands of times over several years without degrading.

The team describes the work that went into the creation and testing of the Methuselah quinone in a paper that is published in the journal Joule.

“We designed,” says study co-leader Roy G. Gordon, who holds professorships in chemistry and materials science at both Harvard establishments, “and built a new organic compound that can store electrical energy and also has a very long life before it decomposes.”

Gordon explains that he and his colleagues approached the task by identifying the “degradation processes of the molecules that we previously used in flow batteries.” After that, they built more stable molecules that didn’t have those problems.

The team had already reported some progress in a previous study. But at that stage, while the solutions that they came up with lasted for a long time, the voltage was low.

If the voltage is low, the energy stored for each molecule is low and raises the cost of storage per unit of energy.

“Now,” says study co-leader Michael J. Aziz, who is professor of materials and energy technologies at the School of Engineering and Applied Sciences, “we have the first chemistry that has both long-term stability and comes in at more than 1 volt, which is commonly considered the threshold for commercial deployment.”

He and his colleagues believe that flow batteries with the Methuselah molecule on board will be the first to satisfy all the requirements for use by utilities.

Because Methuselah works in a weak alkaline electrolyte, flow batteries based on the design won’t need costly materials to contain it.

Some of the funds for the study came from the United States Department of Energy Office of Electricity storage program. Imre Gyuk, the Office’s director of research, remarks that the work “represents a significant advance towards low-cost, long-duration flow batteries.”

“Such devices are needed,” he adds, “to allow the electric grid to absorb increasing amounts of green but variable renewable generation.”

The team is now looking for commercial partners to work with on the next development phase of the Methuselah flow battery. This will include scaling up the technology for industrial use.