The onshore wind turbine platform advances the proven technology of GE’s 2 MW and 3 MW fleets, which serves an installed base of almost 20 GW. It also utilizes architecture and innovations from the 4.8-158 wind turbine which was introduced in 2017.

Cypress’ creators designed it to scale over time. Thus, GE can offer a wide array of hub heights, power ratings, and customer needs across the 5 MW range.

Additionally, the platform offers an AEP increase of up to 50% over the platform’s life versus GE’s 3 MW turbines.

The Cypress platform, which includes the 4.8-158, will be powered by a revolutionary 2-piece blade design. The design also enables the manufacturer to produce longer blades. Improving logistics also means that more siting options are available. 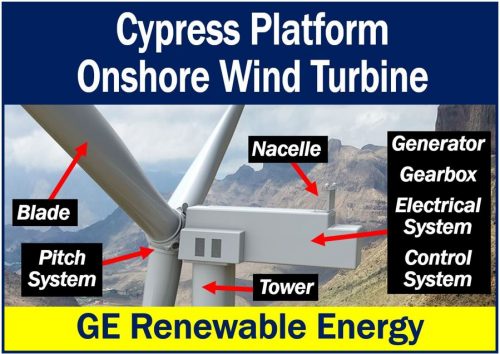 In a press release, GE Renewable Energy says the following regarding the proprietary design:

“The proprietary design will allow these larger turbines to be installed in locations that were previously inaccessible.”

With the new design, blade assembly can take place on site, which significantly drives down costs. The blade tips offer customers greater flexibility to address site requirements and wind conditions.

“The high-tech carbon blades were developed through the longtime partnership between GE’s Onshore Wind business, GE’s Global Research Center and GE’s LM Wind Power, taking advantage of the research, design and large-scale manufacturing expertise of these teams to bring the blades from concept to a tested and proven reality.”

The platform leverages the best of GE Renewable Energy’s 2 MW and 3 MW turbines, including the proven DFIG, and a robust drivetrain architecture. DFIC stands for Double-Fed Induction Generator.

According to GE Renewable Energy:

“The machine is specifically designed for services, with enhancements to help with facilitating up-tower repairs and troubleshooting with its up-tower electrical system, while also pushing the limits of traditional reliability levels on major components, through increased systems level hardware testing and more robust manufacturing processes.”

“This combination of planned, condition-based and predictive services will help to ensure more reliability, uptime, and production while ultimately lowering lifecycle costs for the customer.”

It focuses on onshore and offshore solar and wind energy. It also focuses on hydroelectric power generation.

Wind energy refers to capturing the energy in moving air – the wind – and converting it into electricity. Before we had electricity, we used wind energy to grind grain.

Wind energy is a type of renewable energy. Renewable energy is energy whose source never ends, i.e., it never runs out. We can never use it all up so that there is none left.

In this context, the words ‘energy‘ and ‘power‘ have the same meaning and are interchangeable. In other words, we can say wind energy, solar energy, or wind power, solar power, geothermal energy, etc.

Solar energy uses the energy from the sun to generate electricity. The Sun’s energy, in a human timescale, is everlasting.

Tidal power, a type of hydropower, uses the energy in moving tidal waters. Biomass is organic material that comes from animals and plants. We use biomass to generate energy. Historically, we have used biomass to heat our homes. For example, wood in a fireplace is biomass.