Intel to produce mega-powerful computer for US Department of Energy

Intel Corporations’ subsidiary Intel Federal LLC has been awarded a contract by the US Department of Energy’s Argonne Leadership Computing Facility to deliver two next-generation supercomputers to the Argonne National Laboratory.

The contract forms part of the Department of Energy’s (DOE’s) multimillion dollar initiative to build state-of-the-art supercomputers at Livermore, Lawrence, Argonne and Oak Ridge National Laboratories that will be up to seven times more powerful than current top supercomputers.

CORAL (joint Collaboration of Oak Ridge, Argonne and Lawrence) will help consolidate US leadership in scientific research and maintain its position as the world’s number one hub for next-generation exascale computing for years to come. Intel was selected by the U.S. Department of Energy to deliver the nation’s most powerful supercomputer. (Image: Intel)

Intel Federal LLC was chosen as the prime contractor and will work together with Seattle-based, supercomputer manufacturer Cray Inc. as the system integrator and manufacturer of these next-generation (HPC) high-performance computing systems for the Argonne Leadership Computing Facility (ALCF).

“The largest system, to be called Aurora, is based on Intel’s HPC scalable system framework and will be a next-generation Cray ‘Shasta’ supercomputer.”

“The Aurora system will be delivered in 2018 and have a peak performance of 180 petaflops, making it the world’s most powerful system currently announced to date.”

The second system, called Theta, will serve as an early production system for the ALCF. It will be delivered in 2016 and will provide performance of 8.5 petaflops while requiring only 1.7 megawatts of power.

A petaflop is a quadrillion (thousand trillion) FLOPS (floating point operations per second, one thousand teraflops). 10 to the 15th power FLOPS.

“The selection of Intel to deliver the Aurora supercomputer is validation of our unique position to lead a new era in HPC. Intel’s HPC scalable system framework enables balanced, scalable and efficient systems while extending the ecosystem’s decades of software investment to future generations.”

“We look forward to the numerous scientific discoveries and the far-reaching impacts on society that Aurora will enable.”

The Aurora system will be 18 times more powerful than Mira, its predecessor, while utilizing just 2.7 times the energy usage.

The aim for the Aurora system is for more durable, powerful and efficient batteries and solar panels, better biofuels and more effective disease control; enhancing transportation systems and enabling production of quieter and highly efficient engines; and wind turbine design and placement for better efficiency and reduced noise.

“Argonne’s decision to utilize Intel’s HPC scalable system framework stems from the fact it is designed to deliver a well-balanced and adaptable system capable of supporting both compute-intensive and data-intensive workloads.”

“We look forward to collaborating with both Intel and Cray on this important project that will be critically important to U.S. high-performance computing efforts for years to come.”

“The Aurora system will be one of the most advanced supercomputers ever built, and Cray is honored and proud to be collaborating with two great partners in Intel and Argonne National Lab. The combination of Cray’s vast experience in building some of the world’s largest and most productive supercomputers, combined with Intel’s cutting-edge technologies will provide the ALCF with a leadership-class system that will be ready for advancing scientific discovery from day one.” 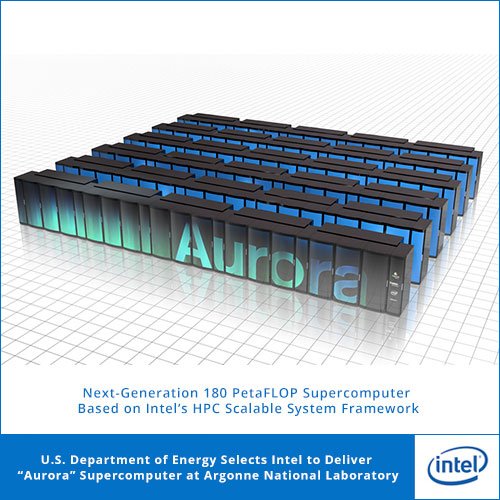