Russian robot can shoot guns accurately with both arms

A Russian humanoid robot that is being developed to travel on space missions with human cosmonauts, has been trained to shoot using two guns – one in each hand. Nicknamed the Cyber Cosmonaut, scientists are currently working on improving its decision-making abilities and motor skills.

Russian scientists do not know whether this robot will be used to colonize the Moon. For the moment, it is destined to join the team of humans on International Space Station orbiting the Earth, as soon as it is ready. 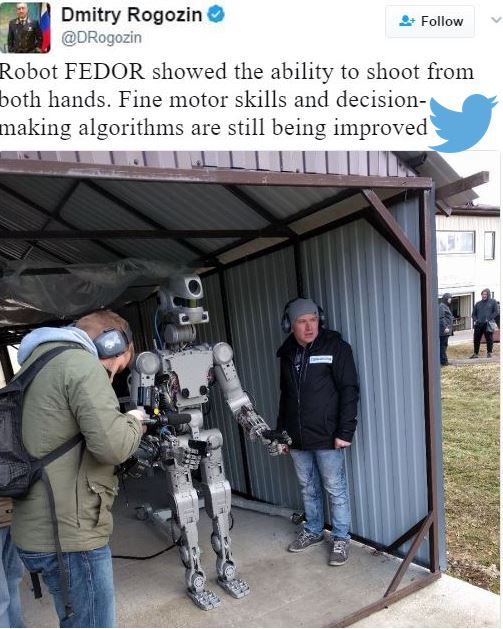 According to INRUSSIA, the Russian robot, known as FEDOR (Final Experimental Demonstration Object Research), is already able to:

– Stand up after falling over.

– Crawl on its belly.

– Crawl on all fours.

– Screw in a light bulb.

– Open a lock by inserting a key into it and turning.

– Open and close a door.

– Walk up all kinds of stairs, including uneven ones.

– Shake hands and give researchers high-fives. In November 2016, the robot successfully operated a hand saw, a welding machine and a fire extinguisher.

In a series of tweets and Facebook posts, Dmitry Rogozin, Russia’s Deputy Prime Minister, shared a brief video and several photographs that showed some of the clever things the new robot can do, such as shooting – a gun in each hand – at a target board with amazing accuracy.

In one of his posts, the Deputy Prime Minister writes:

“Russian fighting robots – guys with iron nature. Robot platform FEDOR showed shooting skills with two hands. We are not creating a Terminator, but artificial intelligence that will be of great practical significance in various fields.”

The robot, which has the latest in AI (Artificial Intelligence), is being taught to set priorities and make decisions, a vital skill when you are out in a spaceship. Although it is a sophisticated robot, with two arms and legs, just like a human, the Russian robot FEDOR insists that it is NOT a Terminator.

The robot, which is 6-foot tall and weighs approximately 105 kilograms (233 pounds), can lift up to 20 kilograms (44 pounds) of cargo. A human wearing a special suit can control it remotely – it is also able to work autonomously and respond to voice commands. It was developed by Android Technics and the Advanced Research Fund.

When the Russian robot is ready for action and work, it will be sent to the ISS (International Space Station) and will carry out tasks that humans are either unable or unwilling to do.