Scientists have invented a programmable biomaterial that can switch from insulating to cooling and back again depending on how much water is present.

They see the programmable biomaterial – which was inspired by a protein that is found in the suckers of some squid tentacles – being useful in a range of applications. 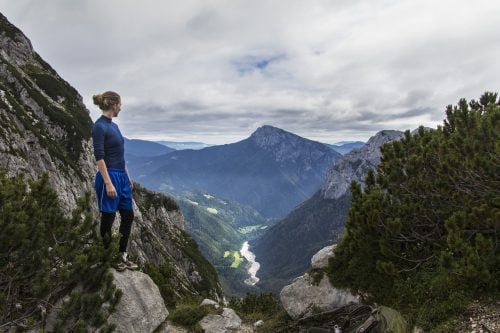 The programmable biomaterial could help athletes to keep warm or cool depending on how sweaty they are. Image: pixabay-1703345

Imagine, for instance, a thermal garment that normally keeps you warm but then changes to a cooling mode when you get hot and sweaty.

The switch from insulating to cooling is activated by water. So, when you are dry the material insulates and keeps you “cosy,” and when you sweat and produce water, it cools you. And, when you stop sweating, it goes back to insulating mode.

What makes this biomaterial special and new is that it does more than just adopt a passive state like a “breathable” fleece when in cooling mode. It “actively” carries the heat out of the garment.

The scientists found that they could manipulate the thermal conductivity by “nearly a factor of four following hydration.”

“The thermal conductivity of materials,” says co-senior study author Patrick E. Hopkins, who is a professor at UVA, “is typically assumed to be a static, intrinsic property of a material.”

However, he and his colleagues showed that it is possible to “switch” a material’s thermal conductivity on and off rather like turning a light bulb on and off. Except that the switch uses water instead of electricity.

“This will allow,” he adds, “for dynamic and controllable ways to regulate the temperature and/or heat flow of materials and devices.”

The programmable biomaterial was inspired by a protein found in the ringed teeth-like structures that are inside the tentacle suckers of some squid. The “squid ring teeth” help the creature to maintain a tight grip on many forms of prey.

The protein has inspired new avenues of research into programmable biomaterials with unique properties, including remarkable strength, self-healing ability, and, in this case, thermal regulation.

One of the features that makes the protein “reprogrammable” is that it contains “tandem repeats,” which are repeated sequences of DNA that lie alongside each other.

The scientists experimented with different numbers of tandem repeats and tested how the material reacted to water.

When ambient conditions are dry – with humidity under 35 percent – the thermal conductivity of the material is similar to that of “disordered polymers and water-insoluble proteins,” they note in their study paper.

But, because of its more ordered molecular structure, the thermal conductivity of the programmable biomaterial goes up significantly when wetted – either through raised humidity, sweat, or water. It is as if a switch has been turned on.

The researchers found that increasing the number of tandem repeats in their synthetic version of the squid protein proportionally increased the material’s thermal conductivity under the wetter conditions.

And when the conditions return to dry again the switch is turned off and the material’s ability to conduct heat is greatly reduced – it goes back to being an insulator.

In addition to “smart” garments and textiles they foresee applications ranging from data storage and electronics to refrigeration.

Another significant feature of the invention is that the protein for the programmable biomaterial can be extracted from squids or made using industrial fermentation. This is a more sustainable alternative to polymers made from fossil fuels.