Across the world today, finding sustainable ways to replace oil and natural gas is a key priority. CO2 is a hugely-abundant waste product. It can be converted into carbon monoxide and other energy-rich by-products. For it to work on a global, industrial scale, however, the process needs to become much more efficient. CO2 stands for carbon dioxide.

Electrocatalysts are catalysts that participate in electrochemical reactions. They modify and increase the rate of chemical reactions, but the process does not consume them. They have shown promise as a potential way to achieve the efficiency ‘step-change’ in CO2 reduction that is required.

However, the mechanisms by which electrocatalysts operate are in most cases a mystery. Therefore, it is difficult for scientists to design new ones rationally.

Researchers from the University of Liverpool, Beijing Computational Science Research Center, and STFC Rutherford Appleton Laboratory wrote about their new research in Nature Catalysis (citation below).

They demonstrated a laser technique – a laser-based spectroscopy technique – that could be used to study the electrochemical reduction of carbon dioxide in-situ. It could also provide much-needed insights into some of these complex chemical pathways. 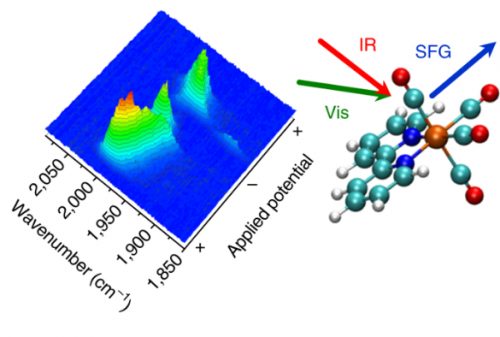 The researchers used VSFG spectroscopy as well as electrochemical experiments to explore Mn(bpy)(CO)3Br, a catalyst. VSFG stands for Vibrational Sum-Frequency Generation. Many scientists are studying Mn(bpy)(CO)3Br because it is a promising CO2 reduction electrocatalyst.

Using VSFG, the scientists were able to do something nobody had ever managed to do in previous experimental studies. They observed key intermediaries that are present at an electrode surface for just a short time.

Co-author, Gaia Neri, a Research Associate at the University of Liverpool’s Department of Chemistry, said:

“A huge challenge in studying electrocatalysts in situ is having to discriminate between the single layer of short-lived intermediate molecules at the electrode surface and the surrounding ‘noise’ from inactive molecules in the solution.”

“We’ve shown that VSFG makes it possible to follow the behavior of even very short-lived species in the catalytic cycle. This is exciting as it provides researchers with new opportunities to better understand how electrocatalysts operate, which is an important next step towards commercializing the process of electrochemical CO2 conversation into clean fuel technologies.”