Dell to buy EMC for $67 billion in record tech deal

The purchase, aimed at helping stagnant PC maker Dell diversify, will create an enterprise technology giant. The market for managing and storing data is today much more profitable than selling PCs – it is also a rapidly-growing business.

The merged company will be better able, as far as the two firms are concerned, to take on the likes of Cisco Systems Inc., Hewlett-Packard Co. and IBM Corp. in the areas of cyber security, mobility and cloud computing. 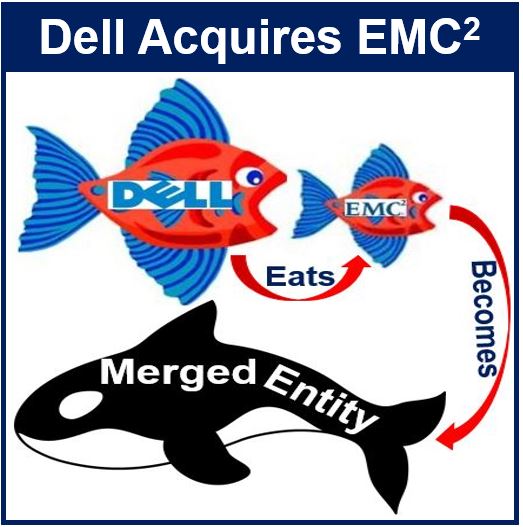 The merged entity will be the world’s largest privately-controlled, integrated technology company.

“I don’t think either Dell or EMC were viable over the long run as a standalone; they really needed each other. Dell was mostly on the consumer side, which is a terrible place to be. EMC had some enterprise products, but not the complete package.”

In a deal which valued EMC Corp. at $33.15 per share at the end of Friday trading, Dell will pay cash at $24.05 per share to EMC stockholders, and also give them a special stock that tracks the share price of VMWare Inc., a virtual software provider of which EMC is a majority shareholder.

The offer is a 19 percent premium on EMC’s valuation.

VMware, whose board approved the merger and says it will recommend the deal to shareholders, will remain a publicly-traded, independent company.

“The combination of Dell and EMC creates an enterprise solutions powerhouse bringing our customers industry leading innovation across their entire technology environment. Our new company will be exceptionally well-positioned for growth in the most strategic areas of next generation IT including digital transformation, software-defined data center, converged infrastructure, hybrid cloud, mobile and security.”

“Our investments in R&D and innovation along with our privately-controlled structure will give us unmatched scale, strength and flexibility, deepening our relationships with customers of all sizes. I am incredibly excited to partner with the EMC, VMware, Pivotal, VCE, RSA and Virtustream teams and am personally committed to the success of our new company, our customers and partners.”

“I’m tremendously proud of everything we’ve built at EMC – from humble beginnings as a Boston-based startup to a global, world-class technology company with an unyielding dedication to our customers.”

“But the waves of change we now see in our industry are unprecedented and, to navigate this change, we must create a new company for a new era. I truly believe that the combination of EMC and Dell will prove to be a winning combination for our customers, employees, partners and shareholders.”

Video – What is an acquisition

An acquisition or a takeover occurs when one company purchases another. This Market Business News video explains the meaning of the term.