Automation is the use of electronics and computer-controlled devices to assume control of processes. The aim of automation is to boost efficiency and reliability (not to be confuses with automated market maker). In most cases, however, automation replaces labor. In fact, economists today fear that new technology will eventually push up unemployment rates significantly.

In many manufacturing plants today, robotic assembly lines are progressively carrying out functions that humans used to do. The term ‘manufacturing’ refers to converting raw materials and components into finished goods, usually on a large scale in a factory.

Automation today exists in all functions within industry including integration, installation, procurement, maintenance, and even marketing and sales.

According to PC Magazine, automation by definition is:

“Tape and disk libraries have been called ‘automation systems’ because robotic arms pick cartridges out of a stacker and move them to the drives.” 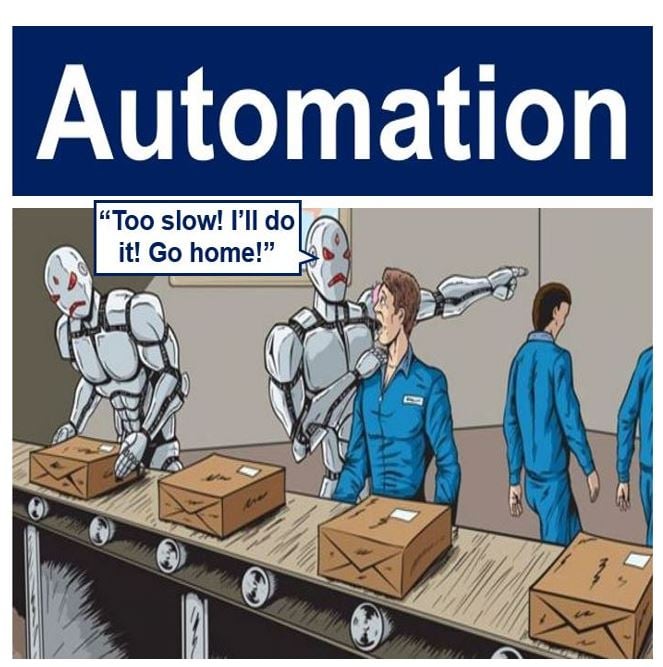 Artificial intelligence is gradually creeping into every aspect of our daily lives. Not only is it becoming more common in the workplace, but also in the home and even outdoors. Will it lead to a better quality of life and standard of living for humans, or a living hell?

Automation and the office environment

Over the past forty years, information technology has completely changed the office environment. Such functions as communication, documenting, correspondence, and filing have become fully automated. Offices today even feel and look completely different from what used to exist in the 1950s.

Apart from the huge difference in decibel levels, our offices today have much less furniture. Offices used to have loud typewriters, filing cabinets, and other furniture.

If we could travel in a time machine to the 1950s, the piles of paper would amaze us.

The average office desk used to be full of materials and equipment. Examples included folders full of paper documents, calculators, phone books, staplers, diaries, and post-it-notes. There were also Filofaxes, sticky tape, pens, and even paper maps and atlases.

While some traditional office workers still keep a number of these items in their desks, technology, and automation have eliminated the need for most of them.

How many of us today use a map made of paper to find directions compared to thirty years ago? When you wanted to find somebody’s phone number, you had to look it up in a book. You could also telephone a service and talk to a human being. Today, however, we go online or talk to a robot programmed with voice-recognition software.

Technology has shifted most office workers from a fixed 9-to-5 routine to flexible working. Thanks to the Internet, the Cloud, laptops, tablets, and smartphones, we can now work from anywhere. Not only can we work wherever we like, but also whenever we want to.

This flexibility means that people are now better able to manage their work-versus-life balance. However, we now have a new problem; we cannot switch off from work completely anymore.

Bank branches used to have lots of staff and customers in them. Today, fewer and fewer of us do our banking physically inside a branch. We do most of our banking either online or by talking to robots on the phone.

Even if we go into a branch, most of the now are full of machines and technology inside. These state-of-the-art machines allow us to complete our banking tasks. In fact, most of us could easily manage without ever having to meet a human banker face-to-face. 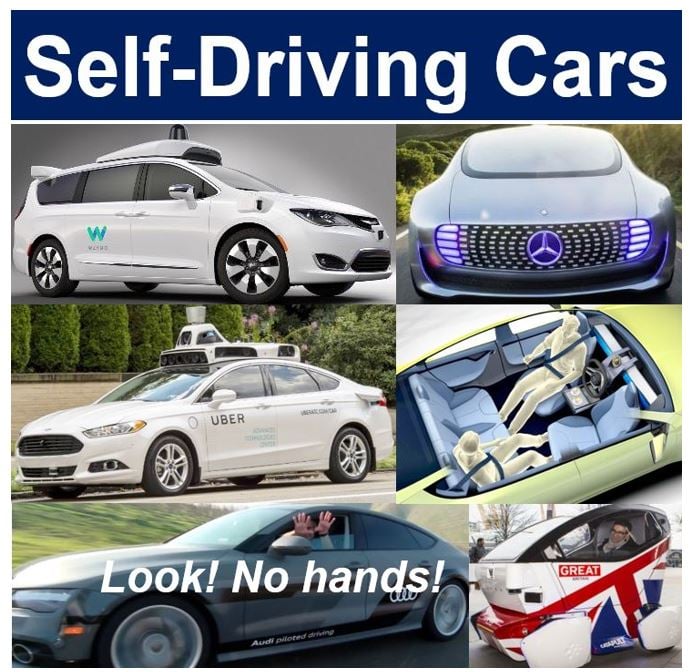 Professor Henrik Christensen, from the University of California San Diego’s Contextual Robotics Institute, believes that babies born today will never drive. Self-driving cars will be everywhere. He also predicts that a wave of companion robots will serve as health care, home companions, assistant robots, robotic pool cleaners, and many others. Some which are reviewed on Roger Corbinetti’s site.

Automation in the manufacturing environment

Manufacturing has undergone enormous changes over the past few decades. Employment in manufacturing in the advanced economies has declined considerably.

In 1996, fourteen percent of the US workforce worked in manufacturing, compared to just 8% today. That dramatic decline was in just two decades! Who knows what the percentage will be in two decades’ time!

Not all of those jobs have disappeared because of automation. Some jobs have shifted abroad to countries with cheaper labor costs. However, a sizable proportion of that loss has been due to automation.

Experts say that the rate of decline in manufacturing employment will not slow down. In fact, most of them predict the problem will get progressively and more rapidly worse.

The Brookings Institution said that by the end of 2016, there were 1.9 million robots in factories and warehouses. In other words, over a period of four years, the number of robots rose by nearly 60%.

Robots are becoming more sophisticated and skilled at performing complicated tasks. The high costs associated with transforming a labor-intensive factory to an automated one is changing. The cost differential with human workers is narrowing rapidly, to the robots’ advantage.

Put simply, it is becoming cheaper and within more business’ budgets to convert to full automation. 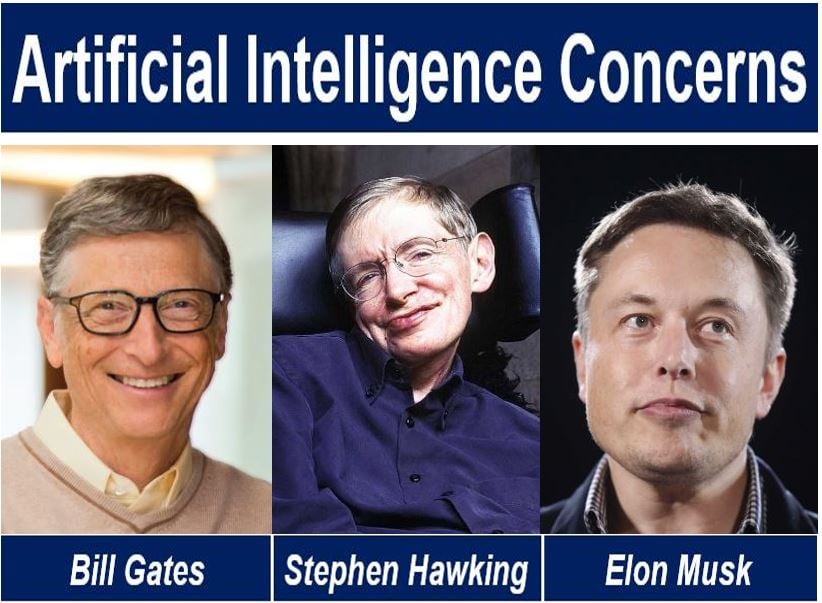 The late Professor Stephen Hawking, Bill Gates and Elon Musk have often expressed concern regarding artificial intelligence (AI). They worry about what will happen to us as AI becomes more sophisticated and smarter. Prof. Hawking said: “It [AI] would take off on its own, and re-design itself at an ever increasing rate. Humans, who are limited by slow biological evolution, couldn’t compete, and would be superseded.” The three men were nominated for Luddite of the Year, mainly because of their worries regarding AI.

In an article – How technology is changing manufacturing – that the Brookings Institution published online, Darrel M. West wrote:

“Estimates for labor cost savings in various countries through automation and robotics now are averaging around 16 percent in industrialized nations. But places such as South Korea have seen 33 percent cost savings, and Japan has seen a 25 percent savings.”

“The convergence of these developments means that robots are helping to increase overall output and save money, but not helping to add jobs. In looking at data from 2010 to 2016, manufacturing has seen 10 to 20 percent increases in output, but only a 2 to 5 percent increase in jobs.”

Robots and other technologies are not only replacing workers in manufacturing, but also in teaching. The number of online courses that run automatically has exploded over the past decade.

The way we move around will soon change dramatically. It will not be long before private cars, buses, and trains have no drivers. In fact, even commercial airliners will probably have no pilots by the middle of this century.

Even professions that are super-secure today will eventually give way to robots. Robot surgeons, doctors, and veterinarians will probably run all aspects of medicine by the end of this century. In other words, by the year 2100, there might not be any human medical professionals.

By 2030, up to 861,000 UK public sector jobs may be automated, says a Deloitte and Reform report. Not only would this cut the wage bill by £17 billion, but it would also reduce the workforce by 16%.

There is growing concern that in the future, only those with specialized qualifications will have jobs. Perhaps skilled artists, talented musicians, and others with gifts that humans admire will be busy. However, what will happen to the rest of the population is anybody’s guess. 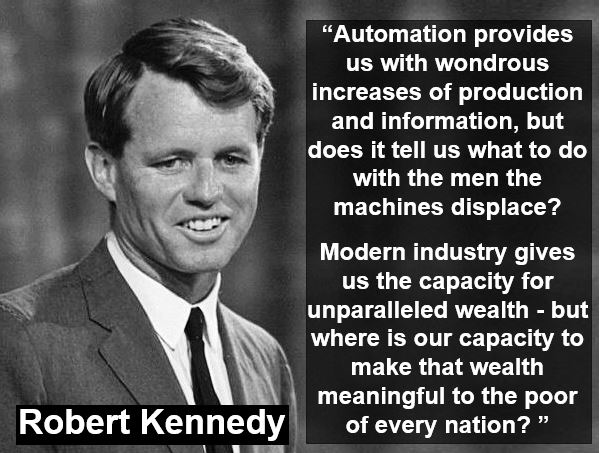 Robert (Bobby) Kennedy (1925-1968) was an American politician from Massachusetts. He was a United States junior senator from New York from January 1965 until June 1968, when he was assassinated. (Image: Wikipedia)

Moshe Vardi warns that over 50% of the world’s workforce will be unemployed within thirty years because of automation. Prof. Vardi is Distinguished Service Professor of Computational Engineering at Rice’s Department of Computer Science.

Not only will smart robots replace humans in the workplace, they will probably out-perform us too. 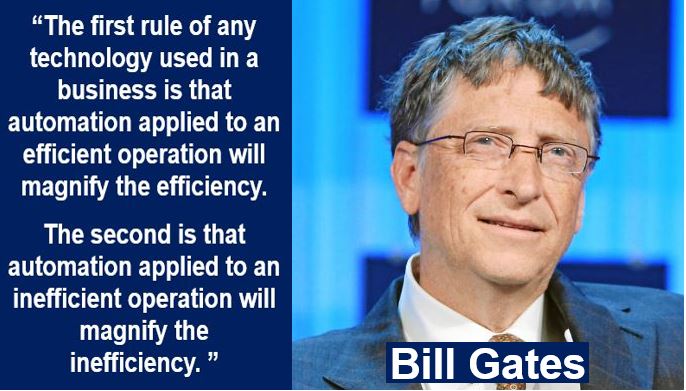 Bill Gates is an American business magnate, investor, author, entrepreneur, and philanthropist. He co-founded Microsoft with Paul Allen, which became the largest PC software company in the world. Since 1995, he has been rated by Forbes as the richest person in the world on many occasions. (Image: biography.com)

Regarding how humans and robots perform, Prof. Vardi said:

“We are approaching a time when machines will be able to outperform humans at almost any task. I believe that society needs to confront this question before it is upon us: If machines are capable of doing almost any work humans can do, what will humans do?”

Our schools must restructure their curricula so that pupils get better training in math, engineering, technology, and science. There is a growing need for workers with *STEM skills as software developers, systems analysts, biomedical engineers, and some other fields.

Video – What is automation?