What is a universal bank? Definition and examples

A universal bank is a bank that combines the three main services of banking under one roof. The three services are wholesale banking, retail banking, and investment banking. In other words, it is a retail bank, a wholesale bank, and also an investment bank. As well as being able to offer an all-encompassing service, universal banks can reap the synergies that exist when they operate in the three services simultaneously.

A typical universal bank also offers other financial services such as insurance.

The Financial Times’ glossary of terms, ft.com/lexicon, has the following definition of universal bank:

“A universal bank is a financial service conglomerate combining retail, wholesale and investment banking services under one roof and reaping synergies between them.”

“The notion is that they would benefit from economies of scale in information technology and access to capital to serve companies and retail customers around the world.” 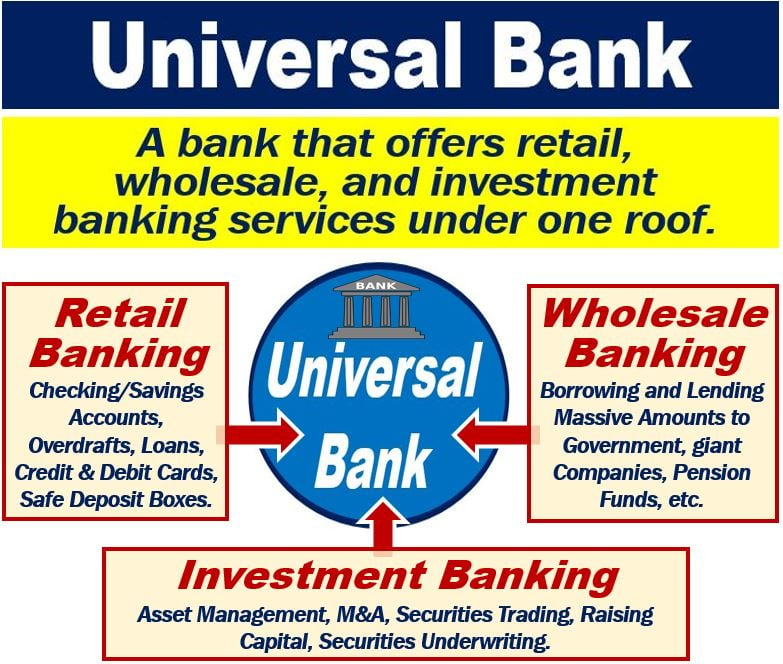 Somebody who has a checking and savings account in a universal bank can take advantage of its investment services. This is useful if customers want to open their own investment portfolio.

Retail banking services members of the public and small and medium-size businesses. It focuses on looking after customers’ money as well as offering loans and mortgages.

Investment banks focus on services for major investors and companies. They specialize, for example, in the investment requirements of pension funds.

Investment banks do not take deposits. In the UK, Ireland, and some other Commonwealth countries, people call them merchant banks.

The universal bank concept is most relevant in the United States and the United Kingdom. Historically, in both countries, there has been a clear difference between commercial and investment banks. In this context, a commercial bank is a retail bank (UK: high street bank).

The Glass-Steagall Act of 1933 drew the distinction in the US.

However, the regulatory barrier to the combination of commercial and investment banks has mostly gone today. Therefore, several universal banks have emerged in both the British and American jurisdictions.

There were once many pure investment banks. However, since the Global Financial Crisis of 2007/8 and the Great Recession that followed, the banking environment has changed.

Wikipedia says the following regarding the banking environment in other countries:

“In other countries, the concept is less relevant as there is no regulatory distinction between investment banks and commercial banks.”

“Thus, banks of a very large size tend to operate as universal banks, while smaller firms specialized as commercial banks or as investment banks.”

This Wainman.net video explains what the activities of a universal bank are.